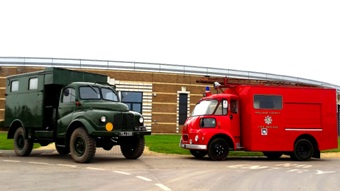 The British Motor Museum is pleased to announce that it has acquired two new 'working' classic vehicles to assist with the delivery of its extensive summer Shows programme. The first is a 1953 Austin K9, an ex-military truck that will be used as a Show Control hub for all the outdoor events. The second is a retired 1965 Morris Fire Tender which will be used as a First Aid point. Both vehicles will make their first appearance at the Classic Land Rover Show on 6 & 7 May.

Tom Caren, Show Manager at the British Motor Museum said "Our previous Show Control caravan had seen better days so I decided that an ex-services radio truck would be a natural replacement! It fits in well with the Museum's British theme and also provides a link to our local history, as it would have been the type of vehicle in service at RAF Gaydon when it was an operational base during the 1950's & 1960's. The vehicle is also highly practical, easily manoeuvrable and the radio body on the back gives you a commanding view of the Show Arena."

The Austin K9 was introduced in 1952 as a military version of the civilian Austin Loadstar lorry. It was modified to make it more suitable for military service with increased track, ground clearance and limited all-wheel drive. The 4x4 K9 was rated as a one-ton truck and was used by the military as a cargo vehicle, ambulance, water tanker and, like this example, a wireless vehicle. The K9 saw duty with the Army and RAF from 1951 until 1980, when some of the 'signals vans' were still in the hands of the Territorials and others were in storage depots. The K9 was equipped with the familiar petrol, overhead valve, 3,995 cc six-cylinder developing 92 bhp. The K9 model also had rifle clips, a gun ring in the roof, and larger tyres fitted all round.

The 1965 Fire Tender is an Morris FGK / Carmichael and was classed as a Pump/Rescue Tender/Salvage Tender. It was mainly an equipment carrier and used occasionally as a fire control vehicle at larger incidents. The Museum's tender served in Lincolnshire for its working life before surviving into preservation.

Tom continued "A paramedic is in attendance at all of our shows. The Fire Tender stands out as an emergency vehicle and is also mobile which means that we can drive it to anywhere on site to suit each show. Our Learning Department is also looking into using it as an outreach vehicle to take to schools."

For more information about any of the Shows and Events at the British Motor Museum please visit http://www.britishmotormuseum.co.uk