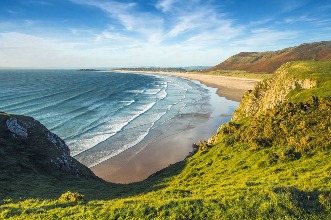 The research, which was conducted by photo printing specialist CEWE, also found that Mount Snowdon as amongst the nation's favourite landmarks.

The study also revealed a continuing trend into Brit's opting to holiday at home, rather than travelling abroad, with 83% of Brit's looking to staycate, with the majority (63%) revealing convenience and cost were key considerations when choosing to take their main summer holiday in the UK. The study also found peace, isolation, exploring somewhere new, and - most importantly - beautiful scenery were also major driving factors for those choosing to ditch the passport and holiday at home.

The top 10 staycation locations were voted as:

"The UK is spoilt for choice when it comes to beauty spots, and this really comes across with our research, from the buzzing Liverpool, to peaceful Bambrough Beach and further afield, there's so much choice and beautiful scenery that the UK has to offer. The hard bit now is choosing where to visit first!"

The CEWE research forms part of a free photographic travel guide the company has compiled for those looking to take advantage of the diversity Britain has to offer. Those looking to holiday at home can access a range of travel guides on the CEWE website, complete with best spots to take stunning photos, the most delicious eateries the UK has to offer and hints and tips on what to do and where to stay.

To take a look at CEWE's travel guides to the top locations in Britain, visit: http://www.cewe-photoworld.com/bestofbritain