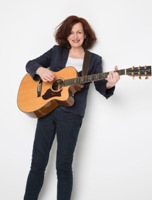 Award-winning Scottish singer Barbara Dickson will be the headline act on Sunday 30 July when she performs at the Warwick Folk Festival which takes place from 27 - 30 July. In this special acoustic performance Barbara and pianist Nick Holland will explore her catalogue of songs as they perform a range of material drawing on Barbara's folk roots, contemporary greats, and some of her classic hits. From the late 1960's Barbara has enjoyed chart success with hits including 'Answer Me', 'Another Suitcase in Another Hall', 'Caravan' and the million-selling number one single, 'I Know Him So Well'. As Scotland's best-selling female album artist she has earned 6 platinum, 11 gold and 7 silver albums and cemented her status as one of the UK's best-loved performers.
The colourful Festival, now in its 38th year, is also headlined by the Australian Spooky Men's Chorale, Oysterband and Goitse from Ireland. There will be the first folk-comedy night and a unique Thursday night evening with DJ & war correspondent Andy Kershaw. Andy's one-man show, 'The Adventures of Andy Kershaw,' has become a hugely successful highlight of many literary festivals. Fascinating and often hilarious, the two hour presentation treats the audience to recollections from a life spent on the front lines of rock & roll, and from some of the world's most extreme and dangerous countries. Also on the Thursday night stars Eve Loiseau singing songs of Edith Piaf with Fiona Barrow on the violin and Murray Grainger on the accordion. Edith Piaf has become synonymous with French Cabaret of the 1940s & 50s and remains France's most popular singer. Piaf's life was the stuff of legend, from her rise from Paris street urchin to star of international renown.

Visitors can also enjoy a full programme of energetic ceilidhs, concerts, singarounds, dance, intimate acoustic performances or full on gigs plus soak up the atmosphere, sit in the beer tent and watch the world go by or join in the sessions, shop in the craft stalls, learn a new skill in the workshops programme, taste street food or simply relax in the wine and cocktail bar. This year there will be more for families with circus skills, storytelling, theatre and crafts, plus workshops spanning music, song, arts and even star gazing!
Dick Dixon, Festival Director said, "Ticket sales are going exceptionally well and I would strongly urge those who want to attend to book their tickets now. With so many superb headline acts including Barbara Dickson and Oysterband, the Festival promises to be another fantastic fun-filled 4 day weekend of first-class entertainment for all tastes and ages".
Local residents can once again get a 20% discount on Friday, Saturday & Sunday day & evening tickets. Residents must have a CV34 postcode and will need proof of their address when collecting their tickets. To book online please use code CV342017. A maximum of 4 tickets per household are allowed.
Visitors to the festival can choose from Friday - Sunday tickets, Thursday - Sunday tickets or just visit for the day, plus under 10s go free! Tickets cost from £19 for a concert or from £107 for the weekend. Tickets can be booked online and over the phone at the Bridge House Theatre Box Office. For more information please visit http://www.warwickfolkfestival.co.uk