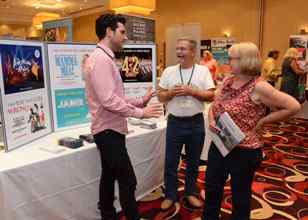 Over 100 delegates attended the Association of Group Travel Organisers (AGTO) Showcase Weekend at the Q Park Royal Hotel, Warrington, for a series of business sessions, networking and familiarisation trips aimed at boosting group tourism to the region.

GTOs and Associate members heard from Rachel McQueen, Director of Tourism, Marketing Cheshire, who highlighted some of the reasons why the region has seen a 7.7% increase in visitor numbers contributing over £3 billion to the local economy. She told delegates that major attractions such as Chester Zoo, Jodrell Bank and the city of Chester had continually invested huge sums to ensure a high quality visitor experience. Cheshire was an all weather destination with excellent transport links making it ideal for year round visits from both domestic and international visitors.

Introducing a panel discussion on 'Experiential Group Travel', AGTO's chief executive, Mike Bugsgang, explained the considerable changes that had taken place in the group travel market over the years. He said the days of a quick trip to the seaside for fish & chips and a paddle were now long gone with customers requiring a much more boutique, tailored experience.

Panelist Sarah Goldsbrough, National Sales Manager Groups, Warner Leisure Hotels, explained how her company had responded to the changing needs of customers. Her hotels had seen a marked increase in groups seeking more interactive experiences during their stay. She said the company was arranging participative activities for groups such as visiting local gardens for hands on sessions in plant management instructed by experts.

AGTO's Kent Branch Chairman, Jim Silvester, flagged up numerous opportunities available to organisers involving sporting activities. As a keen golfer he organised trips for the veterans at his club in Kent to play the equivalent veteran golfers of clubs in Devon and Cornwall.

Also joining the panel was Alex Clifton, Artistic Director of Chester's new £37 million attraction, Storyhouse - a theatre, library, cinema and home to a year-round programme of touring theatre, along with a host of activities across its considerable public spaces. Alex outlined the exciting programme of events taking place at the attraction in 2018 that would be perfect for groups, many of which could be tailored to a particular special interest.

As part of the weekend Marketing Cheshire arranged familiarisation trips for delegates to the surrounding area, themed 'Stately Homes and Gardens', 'Waterways and Heritage' and 'City Sightseeing'.

The weekend ended on a high note from West End theatre star Ashleigh Gray who entertained delegates at dinner with songs from the musical 'Wicked' in which she starred as Elphaba. Ashleigh's appearance was courtesy of the Showcase headline sponsor, made tourism marketing.

AGTO's chief executive, Mike Bugsgang, said: "AGTO Associate members reported high levels of enquiries from GTOs on their stands during the Showcase that followed the business session presentations, so it was good news to see plenty of future group travel business being discussed. It was also great that the delegates had an opportunity to view many of the exciting and innovative attractions in the region and our thanks go to Marketing Cheshire for supporting AGTO by organising the fam trips during the weekend."