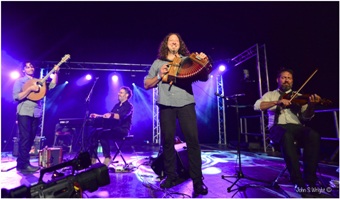 The 37th Warwick Folk Festival, which took place from the 21 - 24 July, attracted record numbers and featured a superb line up of folk stars from around the world. 30,500 people attended a range of festival events over the 4-day weekend with the crowds enjoying a mini heat-wave and glorious sunshine. 165 artists performed during the festival whilst 215 individual events were laid on for visitors to enjoy, 46 of which were fringe events in the town centre.
The Warwick Market was bursting at the seams with happy crowds. Headline act The Unthanks, winners of Best Album in the BBC Radio 2 Folk Awards this year, also attracted record numbers and the Festival ended with a spectacular concert by Le Vent Du Nord from Canada who were given a standing ovation.
This year's packed programme of events included a huge choice of concerts, ceilidhs, workshops, a Craft & Music Fair and a Food, Real Ale & Cider Festival and even Wine and Prosecco Bar. With circus skills, craft workshops and street theatre shows, there was something for all the family to enjoy. There was also a vast array of colourful dance displays, pub music sessions and open air concerts in the historic town centre. New for this year was the Kids Zone which proved extremely popular with families who enjoyed special shows from festival artists and theatre companies
Dick Dixon, Festival Director stated, "We are delighted with the success of our 37th Warwick Folk Festival which attracted record numbers. Everything ran smoothly and with the sun shining, it was great to see so many families and visitors with big smiles on their faces soaking up the atmosphere and enjoying a fantastic range of musical acts and events".
Dates for next year's Warwick Folk Festival are from the 27 - 30 July 2017 and for 2018 it will run from the 26 - 29 July. For more information please visit http://www.warwickfolkfestival.co.uk