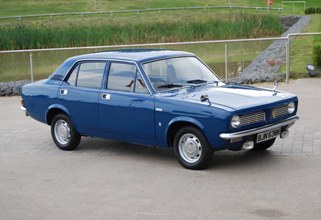 A 1971 Morris Marina 1.3 deluxe has been donated to the British Motor Museum by Mr and Mrs Gooding from Essex who purchased the car in 1973. The Marina, which has been their everyday car for more than 40 years, has 130,000 miles on the clock, and has been cherished and meticulously maintained. Mr Gooding, who is now in his 80s, wanted his car to be looked after and cared for by the British Motor Museum.
The Morris Marina was manufactured by the Austin-Morris division of British Leyland from 1971 until 1980. It was a popular car in Britain throughout its production life, narrowly pipping the Ford Escort to 2nd place in the UK car sales table in 1973 and regularly taking 3rd or 4th place in other years. The 1.3 deluxe was the bread-and-butter model for many drivers. In 1971, the car would have cost £921 including purchase tax.
The workshop at the British Motor Museum has spent the last two weeks preparing and polishing the vehicle. It is now located in the Collections Centre to be enjoyed by thousands of visitors.
Stephen Laing, Curator stated, "We would like to thank Mr and Mrs Gooding for their kind donation. The Marina is perhaps not the most glamorous of models, but it is one that holds memories for many of our visitors. The Gooding's Marina is a splendid example of a car that has given faithful service for one family, each day for so many years".

The British Motor Museum frequently gets offered items of all shapes and sizes. However not every car offered to the Museum is accepted. The Museum has strict procedures about what it can take, to ensure the car is right for the collection and there is adequate space for it.

To find out more about the British Motor Museum visit http://www.britishmotormuseum.co.uk or call 01926 641188.